Showing a child they are seen is one of the most powerful gifts you can give this holiday season. Read more about Hudson’s story below to see how your gift makes a difference! 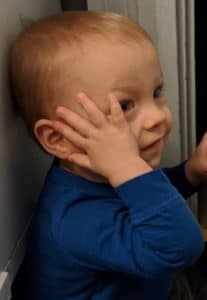 I have been playing a lot of peek-a-boo lately. To the right is a picture of my son, Jack. He is 16 months old.

The best part about peek-a-boo is that Jack is surprised every time his little hands come down off of his face and he realizes that I see him. I’m sure you have seen this game played with a little one or even played it yourself with your own children, nieces, nephews, or grandkids. Have you ever met a baby who didn’t love to play peek-a-boo? Why do they love it so much?

When Hudson first started to come to the Club, he was sad. Lonely. Scared. Angry. He wouldn’t engage in any activities with other children. He just wanted to be in the art room. He would just scribble really, making nothing in particular. This went on for a few weeks until one day Hudson wrote on one of the stools, “I hate them all.” A few days later under the table he wrote, “all alone.”

Hudson needed the Club, but he didn’t even know it yet. At school he felt like one in a crowd. He wasn’t a great student, but he wasn’t a trouble-maker either, so he really didn’t get much attention. He was lonely. He wondered if anyone noticed him or cared for him. He didn’t feel seen.

A few days had passed since Hudson’s last graffiti work in the art room and no one had said anything to him about it. “No one even notices what I do. I’m invisible,” Hudson thought. Little did he know, Mr. Neil had seen Hudson all along. He knew it was Hudson who had written on the stool and the table. Each time he decided that instead of punishing Hudson, he would give Hudson the attention he craved, but in a positive way. 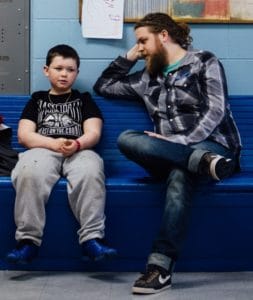 Mr. Neil sat with Hudson for one hour everyday since he wrote on that stool. He just sat with Hudson, sharing things about himself, asking Hudson questions to learn more about him, and really listening to what Hudson shared. It didn’t go smoothly at first, but it only took about a week for Hudson to really start opening up to Mr. Neil. He even left the art room (a big deal!) and went with Mr. Neil to help him blow up bike tires in the Club’s bike shop one day.

Mr. Neil spent this one-on-one time everyday with Hudson for three weeks at the Club until something wonderful happened. Hudson felt seen. “Um, Mr. Neil,” he said sheepishly, “I have to show you something.” Hudson walked Mr. Neil to the places in the art room that he had vandalized. He confessed. Mr. Neil thanked him for sharing that, forgave him, and then showed him how he could clean it up and make it right. Hudson felt terrible about what he did, but it felt good to confess it. He had started to love coming to Club. He hated that he damaged something that mattered so much to him. He had grown quite fond of Mr. Neil, too. Hudson hated the thought of disappointing him.

Feeling seen builds connection to places, people and the whole BIG world around you. It gives you purpose, but it also gives you a sense of responsibility and ownership for your place in that BIG world. Being seen matters.

Being seen mattered to Hudson. From that day forward, Hudson felt safe in the Club. He knew someone was there for him even in the times when he still felt sad, lonely, scared, or angry. He knew now that he was not alone and that he did matter.

Hudson started connecting with other staff at the Club, asking how he could help out, just like he had helped Mr. Neil blow up the bike tires one day. Hudson even became a leader in the art room, helping other kids younger than him with their projects. To see him now, you wouldn’t recognize the isolated child that first showed up at the Club just a few months ago. He is thriving and growing into a happy, confident young man. All because someone took the time to truly see him.

Every day a child walks into the Club and is greeted by name with a smile, they hear – “I see you.”

Every time a child is allowed to dream and given the opportunity
and encouragement they need to work towards those dreams, they hear – “I see you.”

Every day when a child finds their refuge from the storm in the safety
and security of the Clubhouse walls, they hear – “I see you”.

Every time a caring adult mentor stops to take the time to listen to a child at the Club, they hear – “I see you.”

Every time you give to the Boys & Girls Clubs of Bloomington, your gift says to a child in need – “I see you.”

How will you show a child they are seen this holiday season?

You can to shine your light on a child this holiday season and say to a child at the Club – “I see you”.

We see and appreciate YOU for your consideration of this significant gift. The new Clubs already serve as many as 100 more kids each day than before, but we have room for even more kids, just like Hudson, who need us NOW! Please give today to grow the Club’s membership by more than 200 kids each day by the end of 2022.

Thank you for being a part of the success and have a wonderful holiday season!