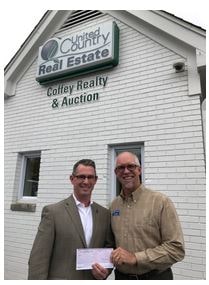 Pictured are Jimmie Dean Coffey, President and CEO of Coffey Realty and Auction and Jeff Baldwin, Executive Director of the Boys and Girls Clubs of Bloomington

After prioritizing which items were to be moved, Coffey Realty and Auction agreed to auction off the seldom-used items at no charge to the club. The proceeds, which totaled nearly $900, allowed the Ellettsville Club to cover the costs associated with the move. Jeff Baldwin, Executive Director, shared, ” The challenges associated with moving the Ellettsville Club were immense. Jimmie Dean Coffey and Matt Arnold were there to lessen the blow considerably. We are forever grateful.”